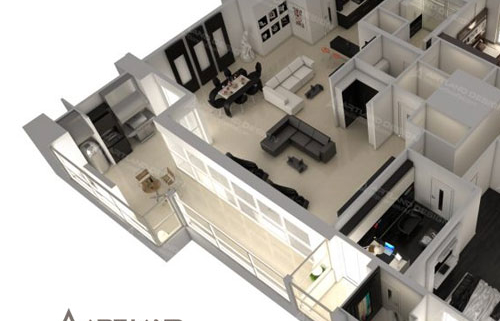 In addition to the obvious application in computer games and action films, the creation of 3D models is widely used in the production of household and industrial goods, architecture and construction, in science, in the manufacture of souvenir products and decorative objects.

In medicine, 3D modeling has become widespread in organ prosthetics. And in the field of training a number of professions for the development of virtual simulators that simulate real working conditions.

Architecture is another area where the use of 3D technology is widespread. A few years ago, the development of the architectural layout took months, kilograms of paper and glue.

With the development of technology, many production processes are simplified. Now, in order to present the building model to the customer, it is enough to have a computer and a 3D printer.

Thanks to them, the creation time of the layout was reduced from several days to several minutes.

3D printing and 3D modeling provide realistic and attractive layouts for the demonstration to the customer.

Such models show the entire infrastructure of the future building – landscape, roads, lighting. Even scientists began to use three-dimensional geological models.

Seismologists, for example, use them to predict events within the earth’s crust due to plate displacement, erosion, etc.

The 3D modeler is a specialist who, based on real and imagined objects, builds their visual models with the elaboration of every detail: from dimensions and bends to all roughnesses and flaws of the simulated object.

The task of the 3D modeler is to create the model most similar to the sketch. With the advent of modern CAD systems and 3D printing technology, architects gladly threw back Whatman drawing paper and glue.

This technology has taken root here perfectly. Now there is no need to pore over paper drawings, and having already prepared a three-dimensional model, sending it to print is not a problem.

A professional modeler and special software will breathe life into the project, show the landscape structure, lighting options and much more.

The market situation is such that the professional level of modelers can be very different, there are now as many of them as photographers.

In the real world around us, there are no ideal things: absolutely smooth surfaces, sharp corners, and all that. It’s possible to simulate something like this using three-dimensional graphics, but this approach is the simplest, and the result will most likely be quite boring (unless, of course, we are talking about a specific situation with clearly defined requirements).

Architectural 3D modelers of ArtLand studio always keep this concept in mind if they reproduce the real world in virtual space.

Our company approaches with this “philosophy” to the creation of each model. Our modelers complicate their task in the process, adding bumps and details from the real world. Then you will see how in the end your model “is being healed”.

How the creation of 3D models for the needs of various fields of activity happens? In general, it looks like this.

A specialist in 3D modeling receives a technical task, where, in addition to describing the model to be created, sketches and drawings, references of similar models can be contained.

Depending on the tasks and technical features of the future model, a 3D package is selected in which the construction of the object takes place. The strategy and methodology of creating a 3D model are considered.

Over the past fifteen years, two modeling methods have become most widespread: Poly modeling and NURBS (Non-uniform rational B-spline) – one of the varieties of creating 3D models in CAD systems.

The fundamental difference between these methods is as follows.

Polygon modeling has great flexibility in creating forms. For video games in this way create characters, various creatures, and other organic forms. In production, this method is used to create 3D models of decorative stucco moldings, figurines, and small plastic products.

At the same time, surfaces constructed according to NURBS curves are mathematically more accurate and, as a result, are more common in industrial design projects, where, along with the flexibility of tools for creating decorative forms, high precision of part design is also required.

The process of creating 3D models using NURBS technology has the following structure. In the projection windows of the 3D package along the XYZ axes, the lines of construction (curves) outline the contours of the future object.

The same curves determine the characteristic nuances of the surface. Then, using one of the surface construction commands: sweep1rail, sweep2rail, network surface, the object’s frame takes on a distinct form. This can be compared, for example, with aircraft modeling, where the wing of an aircraft is first assembled as a frame with stiffness profiles, and then wrapped in tissue paper.

By means of polygonal modeling, the creation of 3D models takes place in a more free form, where the creator acts as a sculpture and has the ability to work with the object as if this object was in life made of clay or plasticine.

From the geometric primitive, sphere or box, divided into segments (polygons), the general shape of the future model is extended by points.

Then, by adding edges to the model’s surface and increasing the polygonality of the model, we get more control over the configuration of the form and the degree of detail. You can also dispense with the original primitive by creating a 3D model directly from polygons.

In this case, we are gaining shape by quadrangles connected to each other, dragging points and edges with the manipulators in order to bring our model into line with the desired result.

In general, we can conclude that today the creation of 3D models confidently supersedes traditional methods of working with form and material, giving us more flexible tools in creating decorative objects and in designing parts for production.

Digital methods for creating 3D models help at the stage of ideas and prototyping to influence the shape and silhouettes of future products, which is an undoubted advantage over trivial modeling methods. The universality of technology opens the boundaries for any field of activity, including special areas.